Golden Triangle in India – a guide to creating unforgettable memories

India is a land of remarkable beauty and diversity – from its spectacular landscapes to medley of regional cuisines – India is truly a land like no other. Whilst there are several stunning Indian cities that have captured the imagination of every traveller, a visit to India would not be complete without experiencing the Golden Triangle. Encompassing the fascinating world of the Moguls and Rajputs, the Golden Triangle takes you through Delhi, Jaipur and Agra.

For first time visitors to India, it’s advised to plan your trips through a reputed tour operator, such as Jetwing Holidays, for example, who organises reasonable India tour packages from Sri Lanka. This will avoid any confusion and allow for a more relaxing holiday. Your trip will start from the capital city, New Delhi – there are so many places to see here that you really need to plan your day if you want to fit them all in. In the centre of old Delhi you’ll find Chandni Chowk, a market created by the mogul emperor Sha Jahan, which remains to this day, a vital part of the city. Narrow streets packed with stalls sell everything from spices, fragrances, food and even electronics. Don’t forget to sample the delicious North Indian cuisines that vary throughout each region as you travel! Must see locations include the Red Fort, Humayun’s Tomb, a mesmerising monument set amid landscaped gardens, and the Qutab Minar complex.

From Delhi, travel to Agra the home of the Taj Mahal. The structure built in memorial by Shah Jahan for his wife Mumtaz, is simply breathtaking, along with the other buildings and gardens that surround it. After seeing the Taj Mahal, visit the Agra Fort where the emperor was held captive by his son, until his death. End your journey in the ‘Pink City’ of Jaipur – view the iconic Hawa Mahal and its latticed windows before moving to the City Palace, the royal residence of the Maharajah of Jaipur. Of all the forts and palaces that dot the region, you can’t leave without visiting Amer Fort, one of the most magnificent palace complexes in Rajasthan. 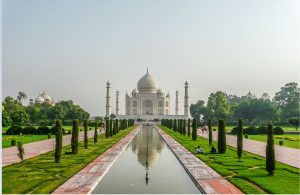 Caleb Falcon is a travel writer who specializes in writing content based on the many exciting world adventures that await intrepid travellers. Google+