Posted on September 13, 2012 by Pushpitha Wijesinghe

Some believe that the beginning of the Universe could be traced back to the Big Bang. Others believe that a higher authority, a God, created the Universe. Either way, the existence of the Universe and all things in it has created an insatiable curiousity in mankind and for centuries astronomers and scientists have dedicated their lives to discovering the hidden meaning that has eluded them for so long. The desire to explore this celestial mystery has lead to many a scientific discovery and in modern times planetariums are utilized to educate our future generations on the secrets of the universe.
The New Delhi Planetarium, officially known as the Nehru Memorial Museum and Library is only one of the five planetariums named after Jawaharlal Nehru, the first Prime Minister of India. The Planetarium was set up by the Jawaharlal Nehru Memorial Fund and is housed in a wing of the Nehru Memorial Museum and Library, previously the official residence of the Indian Premier. With the primary focus of the planetarium being the education of children in the field of astronomy, it pays tribute to the former Premierâ€™s desire to educate children in the schematics of science in order to help them become responsible citizens.
The highlight of the planetarium is the Sky Theatre. Its utilization of visuals, graphics and special effects have made it a very popular attraction attracting over 200,000 people every year. Subsequent to renovations ahead of the Commonwealth Games 2010, the Planetarium also boasts of a projector which makes up to two million stars visible to the patrons and is the place to go to witness solar eclipses for they provide all the necessary facilities to experience this phenomenon safely.
Not only the renovation of the planetarium but many other infrastructure projects were undertaken in Delhi to ensure that the best quality of service was given to the participants and patrons of the 2010 Commonwealth Games. The metro system built under the city of Delhi to efficiently transport athletes and patrons is one such example which has helped to make travelling within Delhi much easier. Likewise, even the Indira Gandhi Airport was modernized and as a result the airport has been transformed into a pleasant and beautiful area making layovers and transits efficient and easy. 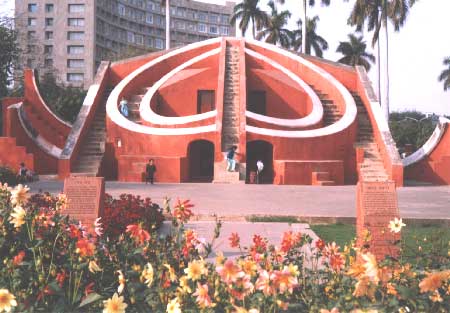