The Dungeshwari Cave – A must visit when in Bodhgaya!

Known as the Mahakala Caves, the Dungeshwari Cave Complex is where Gautama Siddhartha is believed to have meditated for 6 years before he travelled to Bodhgaya. Read on to find out more. 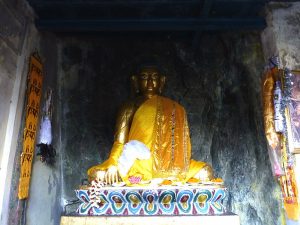 History of the Cave Complex

The Lord Buddha is believed to have meditated and undergone years of severe pence in the caves for six years before he attained final realisation. The main caves house two shrines dedicated to the Lord Buddha while one has been separated for the Hindus.

Two small shrines can be observed that has been built to commemorate this phrase of the Lord Buddha. A golden sculpture of an emancipated Buddha can be seen along with a much larger statue of about 6 ft tall. A statue of the Hindu goddess Dungeshwari too can be observed.

How to Get There

The cave temples are located approximately 12 km northeast of Bodhgaya, Bihar and can be reached easily via local transport options such as taxis, or auto rickshaws from surrounding Bodhgaya hotels including the likes of Oaks Bodhgaya.

The cave complex containing the temples are open to the public from 5 .00 a.m. to 9 .00 p.m. onwards. The best time for a visit is considered to be the time period between October to March. The entrance is free, and visitors are allowed to take photographs. A visit would usually take up about a total of 30 minutes.

Pay a visit to the Dungeshwari Cave complex when in Bodhgaya to take in the place that the Lord Buddha is believed to have meditated for 6 years before arriving at the final realisation.